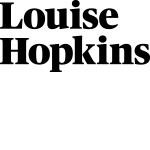 All works copyright the artist

Louise Hopkins is an artist living and working in Glasgow, Scotland.

'Hopkins’ works suggest a chain of contrasts – between mass-produced and handcrafted, reality and artifice, positive and negative, surface and depth, hidden and exposed. In an increasingly fast-paced, image-led world, Hopkins’ interventions are labour-intensive and time-consuming. She slows down time, inviting us to absorb the information she eradicates or exposes through the physical act of painting. In this way, she makes us question the things we see – not only in her work, but in the world around us.’ Lucy Askew (1).

Recently she has been developing large-scale works for urban and rural locations - ‘Hopkins’ art is always responsive, traditionally working with existing marks or folds on paper…but in these large-scale works, she is responding to something much larger: the environment itself. Just as Dance Number spoke to its location, so Flying Fox addresses Cample Line, the colour of the roof beams, the red sandstone of the walls, the vibrant green of the trees outside. It’s as if she has found a way to take the principles by which she always worked and apply them on a whole new scale… Hopkins’ work repays time spent, and the longer one spends…the more one notices complex layers of response’. Susan Mansfield (2).

In 2021 Hopkins exhibited alongside Paule Vézelay in a two-person exhibition You can have curves and straight lines...Paule Vézelay/Louise Hopkins at 42 Carlton Place, Glasgow. In 2018 Hopkins made Flying Fox - a temporary commission and exhibition at CAMPLE LINE in rural Dumfriesshire, and in 2017 she made Dance Number, a temporary artist wall commission outside the Mackintosh Building at Glasgow School of Art. In 2015/16 a group of 7 works were included in Dévider le reel at Les Abattoirs, FRAC Midi-Pyrenees. In 2014 she had a one-person exhibition Black Sea, White Sea as part of GENERATION, the celebration of 25 years of Contemporary Art in Scotland. She was one of 6 artists to represent Scotland at the 52nd Venice Biennale in 2007, and in 2005 she had a major one-person exhibition Freedom of Information at the Fruitmarket Gallery in Edinburgh.